Well, I had planned to make this a blog about some brief highlights from the entire season, but I made it exactly one highlight... And suddenly there was an entire page. So, it appears the World Champs relay was a pretty special highlight for me this season! 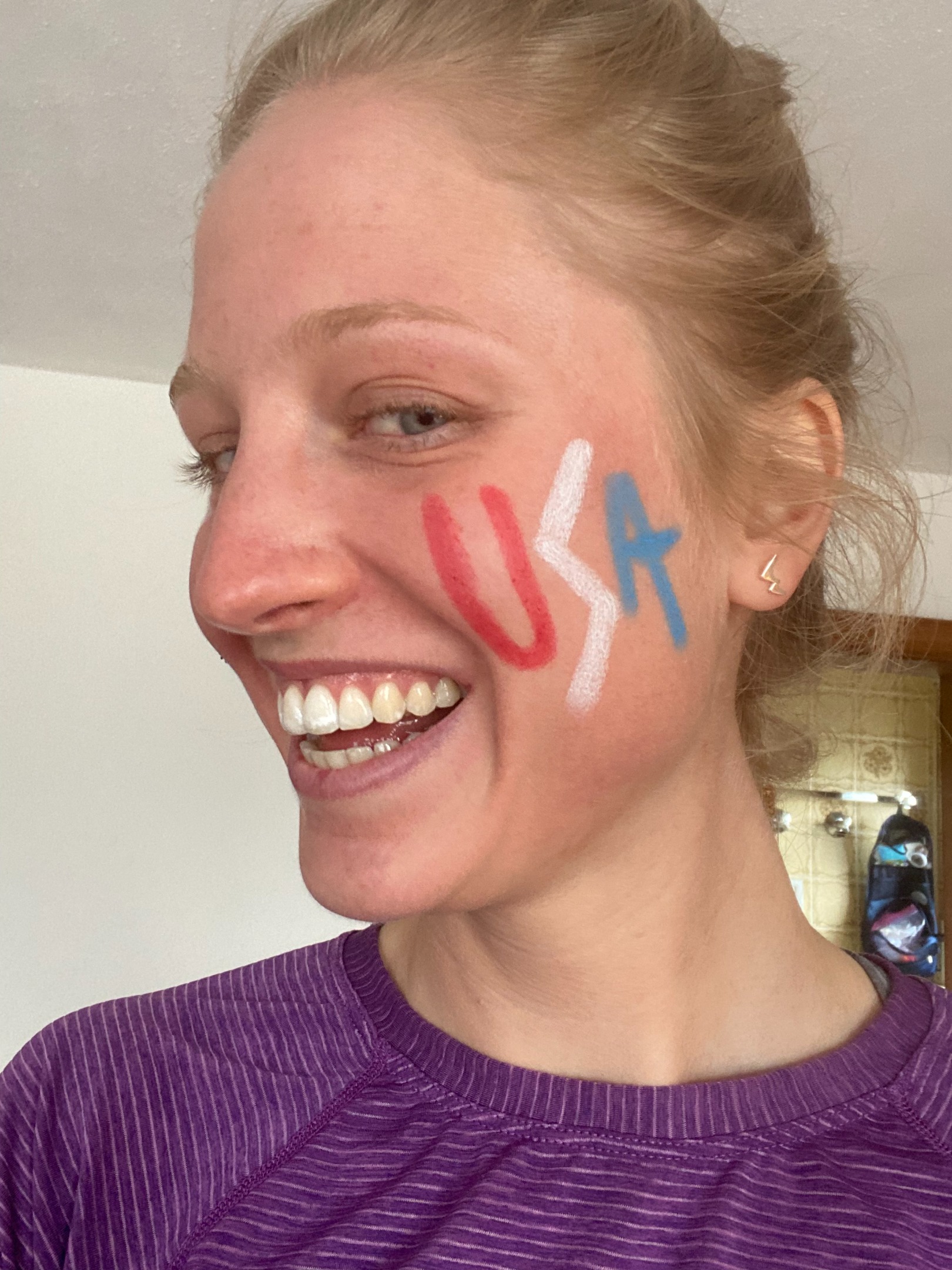 There is something about relay day that makes me feel more connected to my teammates and also to the sport of cross country skiing. I hadn’t thought about this specifically in the past, but this season made it especially obvious that relays are what motivates me more than any other race. It was clear to me this season that true fulfillment from a result falls somewhere on the spectrum between short-lived and non-existent for me. But in a relay, podium or no podium, there is no situation where I feel more connected to those around me. And THAT is fulfilling. 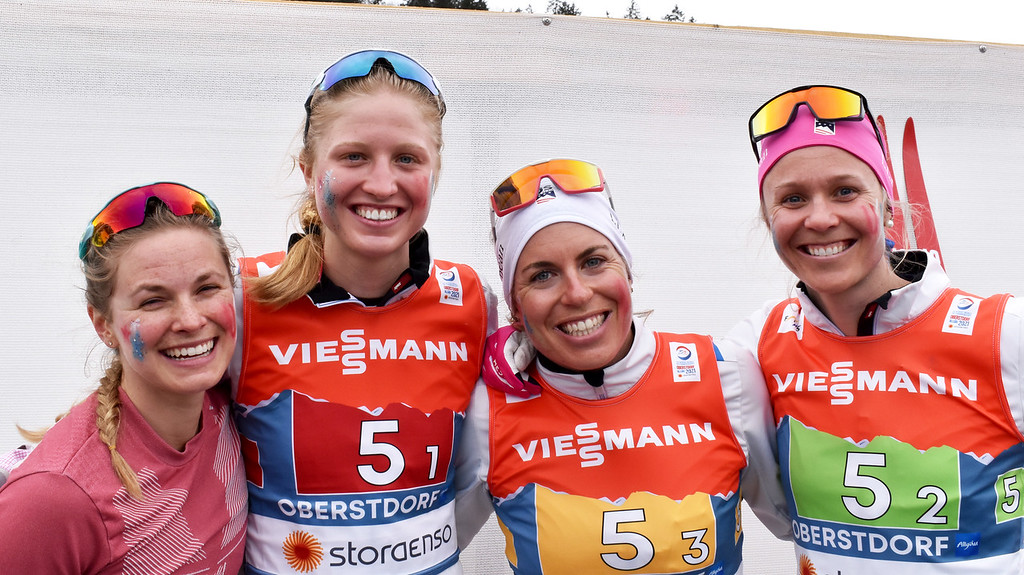 I was so honored to be part of that USA women’s relay team at World Championships. It had been my underlying motivation to do my best to not only be selected for that team, but to race it with literally everything I had on that day; not just for the four of us racing the relay, but for the ENTIRE team. 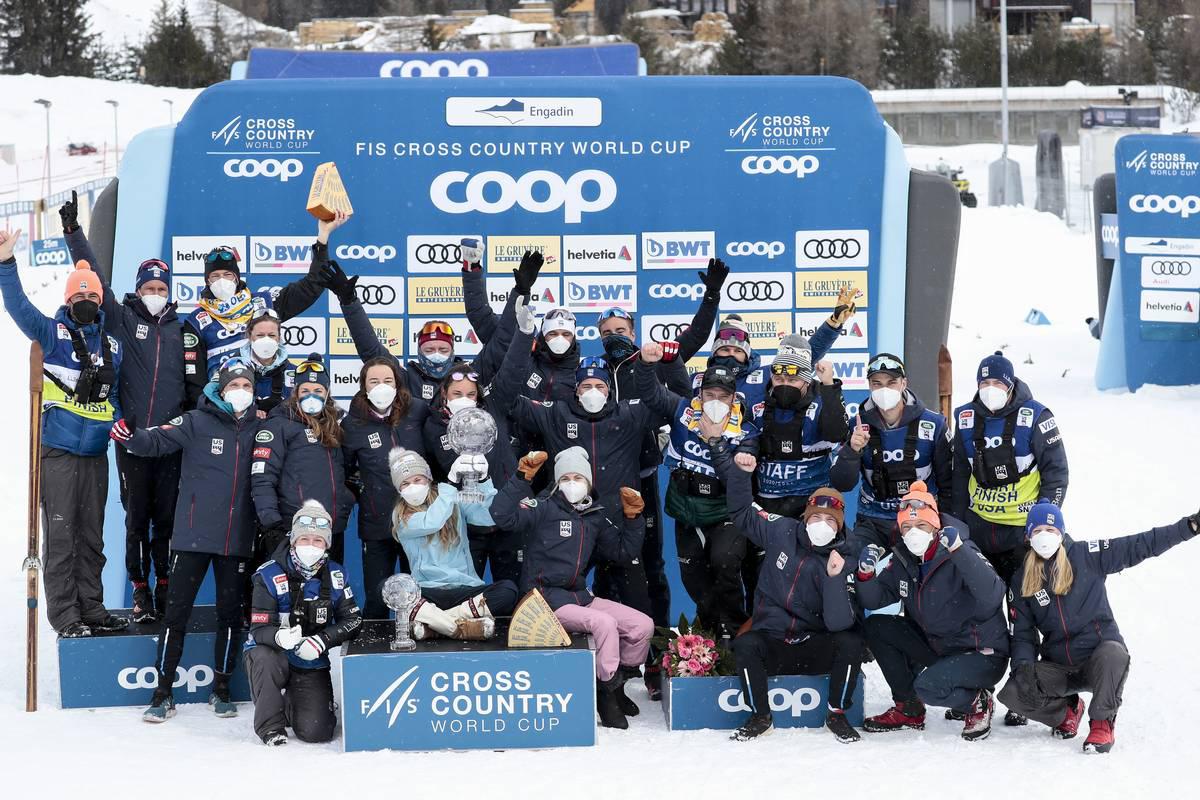 Relay day takes a lot more than only 4 skiers... the team with Jessie's Overall World Cup globe at the end of the season.

I don’t think my body ever quite came back into form after the Tour de Ski in January (but that is why I did the Tour this year—to learn how my body would respond). Heading into World Champs, I was nervous about my form, and I had a tough skiathlon to start my race week. So when the relay was my next race and I learned that I would be the first classic leg, I mentally prepared for two days to endure the uncomfortable sensations I knew my body would experience, given how hard efforts and races had felt the previous few weeks. But, coach always says, “It doesn’t have to feel good to be fast.” Though, to be fair, racing is certainly a lot more fun when you feel good AND are going fast. Lol

Anyway, I made it 3k before those sensations flooded my muscles and I knew I was in for it. But that’s the thing about relays: it’s not just about you out there—it’s about your team. If I was only racing for myself that day, I am quite confident I would have slowed wayyyy down when I started really suffering up the last big climb. And I did lose some time there, but I tried so dang hard to tag off to my teammate Sadie with “the gift of contact”. In our pre-race meeting, our coach, Matt, reminded us that contact to a group of strong skiers is the best gift you can pass along to your teammate in a relay. So I tried my darndest to do that for Sadie. 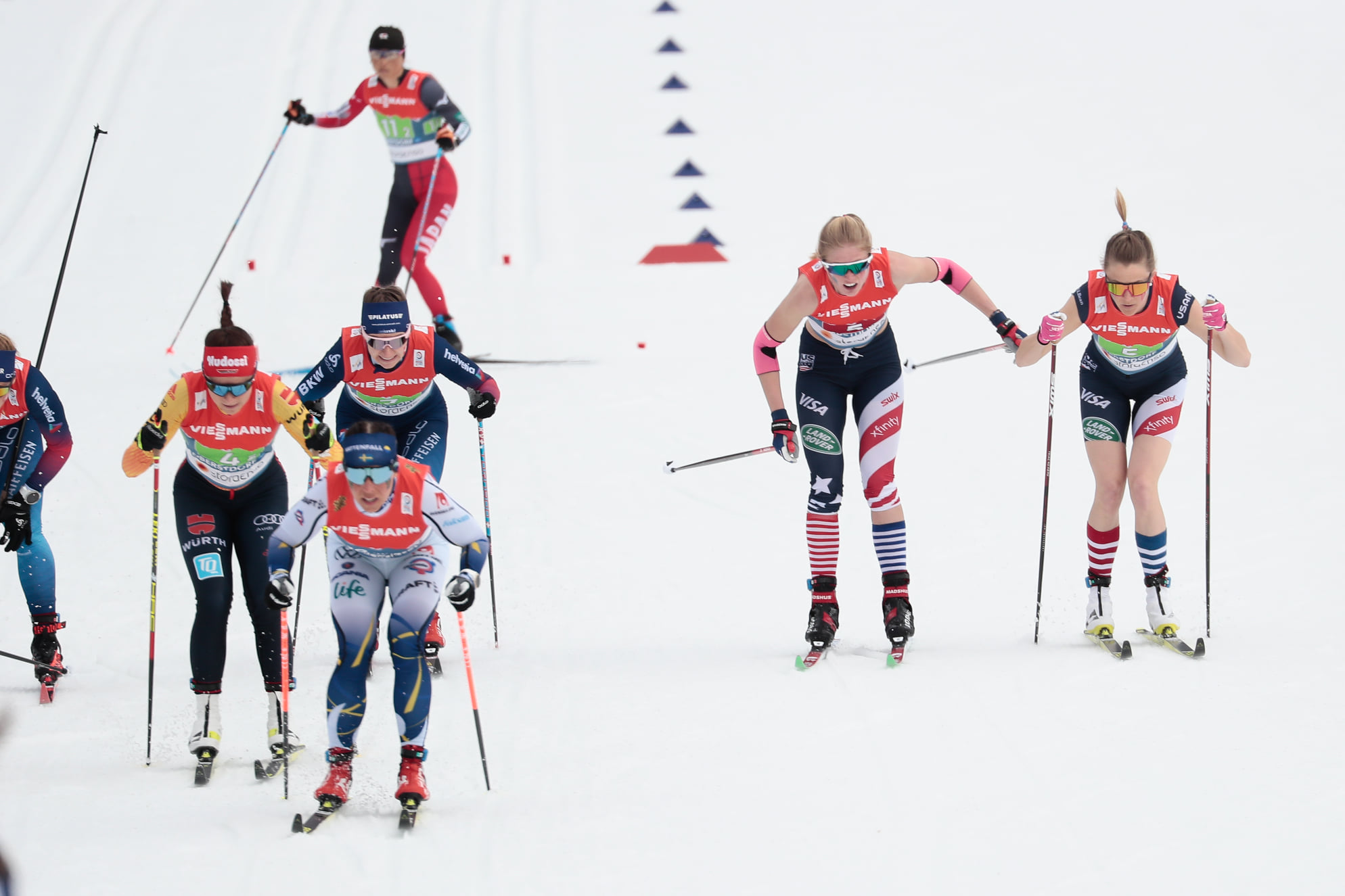 Tag! You're it, Sadie! (Also, why does it look like Sadie and I were photoshopped into a winter race wearing summer outfits?!) Photo: US Ski and Snowboard

Sadie, Rosie and Jessie skied such inspiring races that day. I have always liked being the first leg of a relay, because then I get to anxiously watch and scream at my teammates for the next 45 minutes!!! What a treat. I think each one of us played the cards we had on that given day, and we all dug really deep into the pain cave. Before the race, we’d talked jokingly that if we couldn’t see straight when we finished our respective legs, we’d know we did something right! I can confidently say each of us were seeing stars out there. 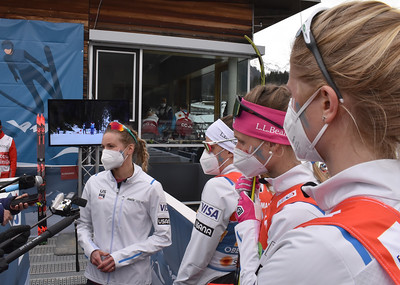 When Jessie skied a courageous anchor leg and crossed the line barely outside of the podium, I cried. Did I cry because we didn’t get a podium? Nope. It would have been cool to get third, I’m sure, but I felt a well of emotions beyond that. Pride, for being part of a widespread team of people that pushed themselves so hard. Confusion, for feeling like we were supposed to be sad with 4th place. Guilt, for not making myself go one second faster. Sadness, for knowing that was Sadie’s second to last race as a professional skier and that she wouldn’t be around the next year. Vulnerability, for knowing that we bravely believed we could reach the podium and raced true to that, but “failed” in many peoples’ eyes. And connection, most prominently, to these women I’ve looked up to my entire career, experiencing the same whirlwind of thoughts. That’s what makes relay days more special than any result ever could. 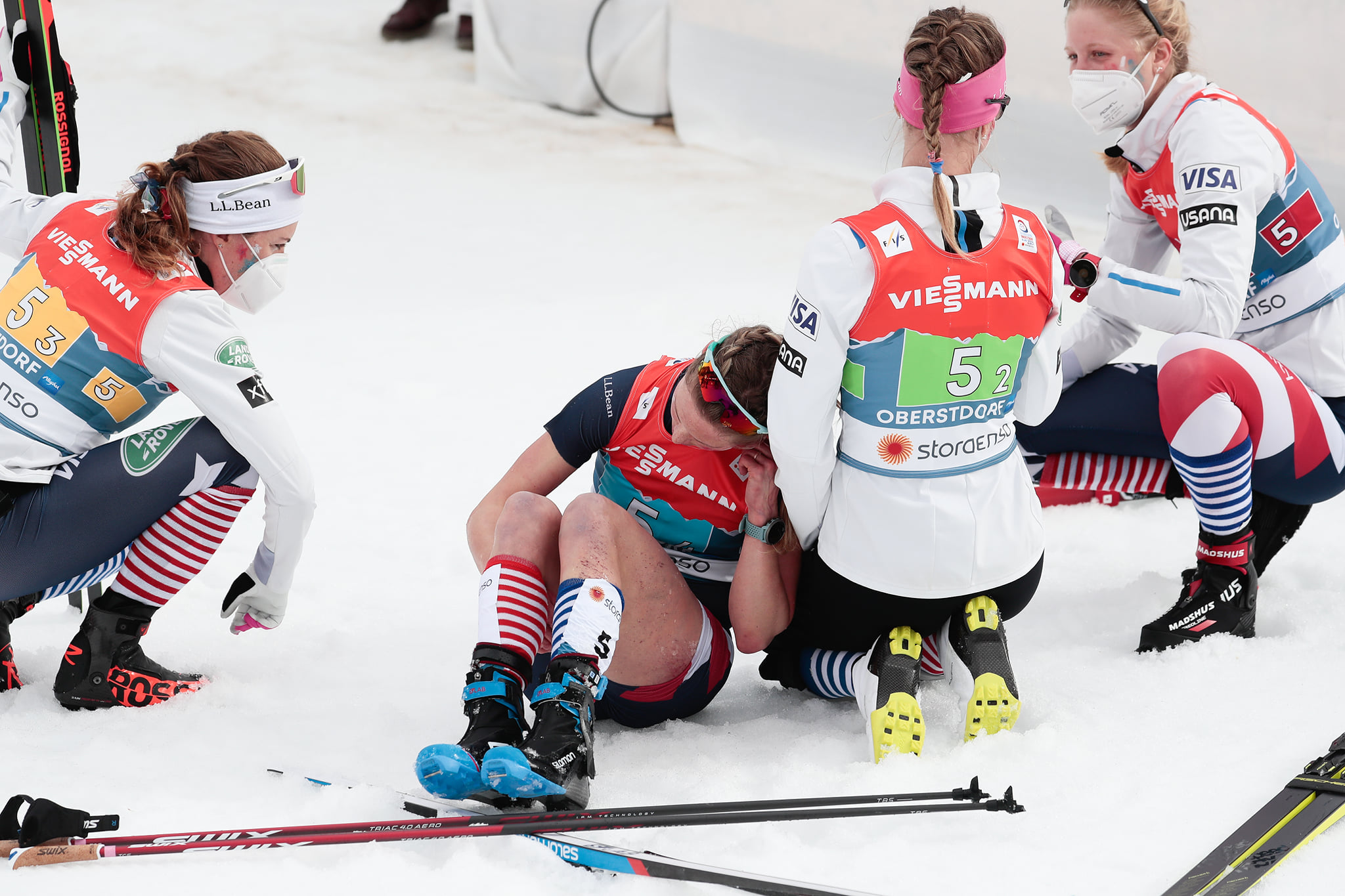 <3 Photo: US Ski and Snowboard

You may also like Four Tour Takeaways (and lots of photos!!)
Share this article
Back to Home